When the opportunity arises to support jazz in our area, I'm committed. The Festival is committed. It's important to,  where possible, attend these concerts and support the organizations that are trying to provide programming to our interest. So, I wanted to congratulate AT&T Performing Arts Center on their presentation of the Jazz Roots show at the Winspear Opera House this past Wednesday, 5/11/11 that starred Saxophonists Candy Dulfer and Grammy Award Winner David Sanborn.

I want to acknowledge some of the positive things that I enjoyed about the entire evening. Special thanks go to Peter Cwalino of Wolf Gang Puck Catering for the hospitality and tour of the Winspear facility. It's a great performance hall and over time will take it's place as one of the grandest venues in the country. It's already a design marvel.

When I arrived for the show, I noticed a big band playing in the cafe/lobby area. It was the Denton High School Big Band! They performed a pre-show set before the audience was allowed inside the auditorium for the show. The band played some very popular songs that allowed me to really take to heart that they are accomplished. When they began to play popular Earth, Wind & Fire hits, I knew these kids were a serious band. Both rhythm and horn sections were extremely tight. Suffice it to say that they will have a place at the festival when the time comes along with other great youth programs. They are the next generation and they need to be encouraged. That's another reason to congratulate ATTPAC. Giving our youth the platform to be heard.

The other great thing I got to witness (pre-show) was Freddie Jones' Trumpets 4 Kids. Where did all of these kids come from? It was great! From what I understand (and, I'll be learning more about the program going forward), Trumpets 4 Kids provides trumpets for aspiring youth who have shown an interest in the artform.Trumpets 4 Kids then takes them on a journey to perform in front of their peers, take on studying and performing classical and jazz. And, to expose them to great performers that they can look up to. On this night, Trumpets 4 Kids brought in a bus load of kids to experience soundcheck. One student was awarded a trumpet that was presented to her by David Sanborn himself. Ms. Netty Matthews, one of the officials from Trumpets 4 Kids introduced me to the young lady and she was so happy to show me her new silver plated trumpet. I asked her did she know who was David Sanborn was, she very humbly said no. So, I explained to her his long career in jazz and that she should Google his name to see who it was that presented her with her brand new trumpet. I'm sure she's going to add what she discovers online about David to her memory of getting her first trumpet in a great performance hall from one of the finest jazz artists of our day. Way to go Freddie Jones for providing Trumpets 4 Kids. It's a great program and those who can should support this great non-profit organization. 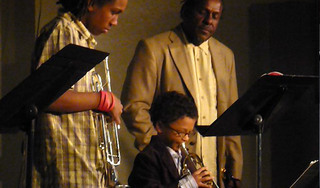 Pictured above: Students with their trumpets with supervision from Mr. Freddie Jones (right) 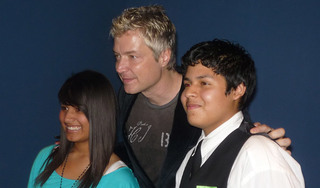 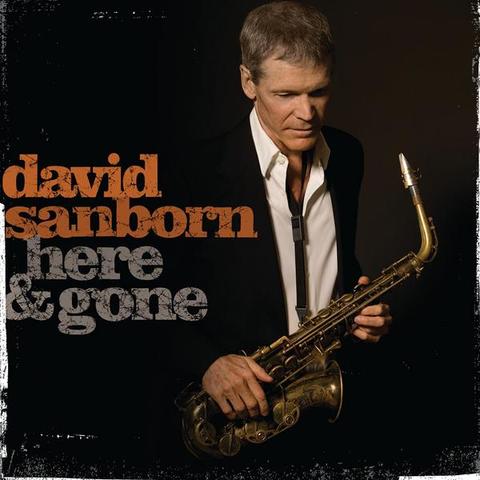 The set began (approx 7:30 pm), with Mr. Carl Griffin of Jazz Roots greeting the audience (not at capacity but a respectable attendance). He brought on David who's set consisted of an organist and drummer only. A trio. I was a little surprised at this configuration but have come to expect surprises from Mr Sanborn. Most of his work over the years lends itself to the full-blown band scenario. But, nonetheless, JAZZ! He executed his set like he always does. He has a tone that is distinctly his own. You can hear him in the Set-List player with the track "Brother Ray".

Aside from playing some great B3 Organ oriented jazz, David took the time to share some of his roots. He's from St. Louis and he spoke of being influenced by Ray Charles. He alerted the audience to the fact that some of the greatest jazz players were from our area. In particular, he mentioned David 'Fathead' Newman and a group of horn players from the area known as the Texas Tenors. Read up on them, these guys were very instrumental in shaping the sound of jazz in the early years of the art-form's emergence.

Toward the end of his set he brought out Ms. Candy Dulfer to share in his jam session. Whenever I see Candy sit in with someone, she always brings a good thing and great energy. Overall, I was pleased with David Sanborn's performance. I was just looking for more in the sense of having his regular band doing all of the hits. But, tonight he was not the star of the show. 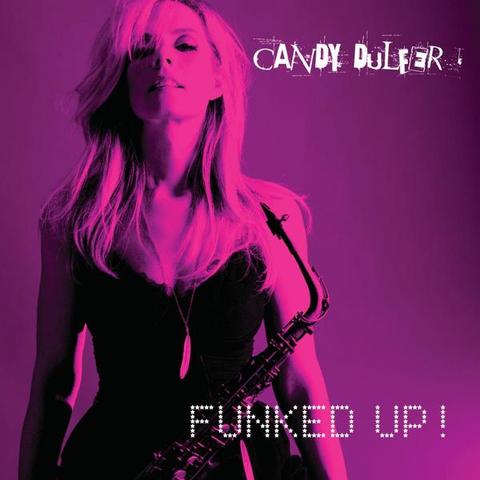 The star of the evening was Candy Dulfer! After a short intermission for the stage change, we were introduced to the full-band of Ms. Dulfer. She immediately kicked in with her hot and funky track "First in Line" (now playing the Set-List) which is like I said, FUNKY and intense. Candy is a beautiful woman who rocks the stiletto heals with the curvy dresses. She's no joke at all. She brings stage presence and constant energy. Many are still learning about the Saxy phenom. She hails from the Nederlands. Home of one of our favorite festivals North Sea Jazz Festival.

This was my first time seeing Candy Dulfer in person. She's all that, just like I thought. You may just see her at our Year One debut. In any event, you will see her again. I thoroughly enjoyed her show and got a chance to meet her after her meet and greet in the lobby. It was also great to be introduced to her mother who provides management support to her daughter. 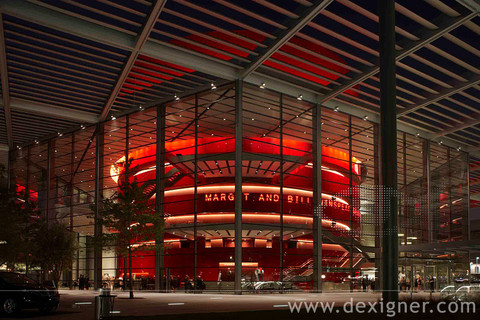 Once again, I want to commend the Center on presenting Jazz Roots in it's first year of programming. Though they've not renewed to bring the program back, they've shown that they want to cater to jazz. Maybe we can help them in this area :).

Overall, this evening which had rain and thunderstorms all around was a great night of jazz. I enjoyed it. Everytime I see jazz presented in a great way, I'm seeing the Festival! So, we have everything to look forward to and it is our intent to elevate every great venue and highlight what makes North Texas and Dallas/Ft. Worth one of the greatest places to live and the 'fastest growing city' in the United States.

I often here the question of "where is there something to do?" There's always been plenty to do in Dallas (and, Ft. Worth). We have a great arts and entertainment community. We just have so many new people in the area that they've not had any bearings about how to connect to the culture. This is where we will make our presence felt via this social network of the Festival. It's about community and it must have a place to congregate. This is the place for that to be done. Our dedication to music, food, fashion, film and the arts in our region will, in time, be unmatched. Why? Because we're uniquely gifted to do this. It's all about vision, passion and community. Together we'll enjoy what the area has while introducing some new things along the way like Uptown Jazz Dallas International Jazz Festival (IJF).

Kate Weiser Will Save Your Easter With Chocolate

Kate Weiser produces beautiful chocolates year-round, but Easter is a special time for her talents to shine. Known for her intricately hand-painted bonbons, candy bars and seasonal goodies, Weiser has cooked up a batch of new products that will be … Continue reading →

In the wake of the coronavirus crisis, restaurants all over DFW—and the country—have been forced to quickly pivot their business models or close down completely. So now is an unusual time to open a new restaurant. And yet… Trinity Groves … Continue reading →

A Note To Our Readers

By Steven Doyle Readers: We have maintained CraveDFW for quite a few years now, and have enjoyed serving the Dallas restaurant community on a small budget. We have written thousands of articles with millions of views. Many of the articles … Continue reading →

Company Cafe is the New Thunderdome!

Company Cafe is still serving clean comfort food on lower Greenville. They are offering 25% off all takeout orders with $5 Mimosas, Bloody Marys, and Margaritas for two. Prepped Heat and Eat Meals for 3-4ppl for $33.  Since the bread … Continue reading →