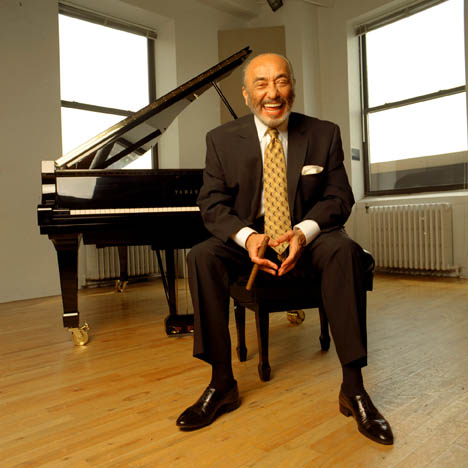 Legendary pianist, composer and bandleader issues statement about the recent elimination of the Latin Jazz category of the Grammy awards

"In unity there is strength, conscientious natural musical minds working together, united in thought will constantly deliver power, the drive and the constant search of the individual mind to create, create, create."

For the full entry from Eddie Palmieri, visit JazzTimes.

On Sunday, May 22nd, at 1pm, world-renowned artists, celebrities, writers, activists, and members of the media will gather at the world-famous Nuyorican Poets' Cafe in the Lower East Side of Manhattan to voice their opposition to the recent announcement by the National Academy of Recording Arts and Sciences (NARAS) to eliminate Latin Jazz from Grammy consideration, as well as many other styles of music representative of the diversity of the American musical landscape.

between Avenues B & C

Panelists and guests will deliver brief remarks in support of the reinstatement of the eliminated fields. A Q&A will follow. Some of the distinguished panelists and guests from the various music communities affected by this decision who will participate are:

Eddie Palmieri - Legendary pianist, 9-time Grammy winner and former NARAS Board of Governors member, responsible for getting Latin jazz recognized as a category;

Ned Sublette - N.Y. Times bestselling author of Cuba and Its Music: From The First Drums to the Mambo and New Orleans: After The Flood; President, QBA Disc Records;

THIS PRESS CONFERENCE IS COMPLETELY OPEN TO THE PUBLIC,

The ill-advised April 6th announcement by NARAS to cut thirty-one categories from the celebrated Grammy awards has been met with shock and loud protests nationally and internationally. Latin Jazz, Contemporary Jazz, Cajun, Zydeco, Hawaiian, Polka, Traditional World, and certain gospel, Blues, R&B, and Mexican categories, among others, have all been unceremoniously erased.

At various regional chapter meetings, NARAS has defended the cuts as being fair and well thought out, although they were made behind closed doors with no input from the membership nor from the respective boards of governors of the regional chapters. This action clearly caters to the established pop and commercial styles that have always dominated the Awards and the controversial annual TV show.

As the grassroots movement from the public sector is going viral, and the unrest and distrust from within the NARAS membership has skyrocketed from coast to coast, NARAS' stock responses have done little to quell the ground spring of questions about their motives.

The May 22nd press conference follows one on May 9th at Yoshi's in Oakland, CA, where considerable opposition to this unprecedented decision, as culturally insensitive and non-supportive of musical diversity, was made by leading musicians including 5X Grammy nominee, John Santos; Grammy-nominated vocalist, Sandy Cressman; members of the Carlos Santana band; Grammy-nominated trombonist, Wayne Wallace; Randall Kline, Head of the SF Jazz Fest; Peter Williams of Yoshi's and more.

Comment by Uptown Jazz Dallas IJF on April 16, 2011 at 2:56pm
For those who don't know who Eddie Palmieri is, this is some of his work in action.

Comment by Uptown Jazz Dallas IJF on April 16, 2011 at 11:03am
We'll be updating the Blog as more information and communities come together. This is one of the main reasons why we've formed a social network for Uptown Jazz Dallas IJF. It's about community. In this case, if those who love Latin Jazz don't step up and unify to support what local latin jazz artits that are in our midst, don't complain later when they disappear. The Latin Jazz community is encouraged to join our jazz community today at www.UptownJazzDallas.com. Together we can keep it alive in North Texas!

I'm sure Mr. Palmieri will keep us in the loop on developments. If a site emerges to provide a unified front, it will be posted right here on the network for all to access. If someone finds out more they should contribute to this thread without delay.

by Steven Doyle We have discussed Tortas Insurgentes before, it is a little Mexican restaurant with the Mexican green VW cab as its mascot located on Northwest Highway and Webbs Chapel in the shopping center anchored by WalMart. They bill … Continue reading →

by Steven Doyle Baja seems to be the best place to tag the origins of the fish taco. All my research points there, at least as far as North Americans are concerned. The true fact is somewhat murkier and no … Continue reading →

Everything You Need To Prepare For A Family Camping Trip

Imagine this — you’re out camping in nature, enjoying the peace and serenity of being away from the city and spending quality time with your family. Everyone’s having a great time until someone starts complaining about mosquito bites. Or maybe … Continue reading →

Community Beer company announced today a new 70k+ sf facility will be located off of Stemmons Fwy between the Design District & Medical District in the renovated Pegasus Park campus at 3110 Commonwealth Drive in Dallas. Complete with a two-story … Continue reading →